As a devoted runner with RA, Alicia Rider says a positive outlook and a great healthcare team help her to compete, thrive—“and make my daughter proud!”

Alicia Rider loves to run—and not even RA can stop her! Fact is, “since my diagnosis seven years ago, I’ve qualified for Boston [the marathon] four times,” she says with delight. (Before RA, Alicia didn’t run fast enough to enter the race even once.) And in 2018? Alicia’s run 17 races—12 of which she’s won!—everything from 5Ks to half-marathons and marathons. “The longer the run, the more I enjoy it!”

It’s not that RA has somehow spared her. Alicia, who lives in Winston-Salem, NC, with her husband, James, and seven-year-old daughter, Finley, has struggled with pain and fatigue, and she still has flares. But back when she required a walker to move from one room of her home to the next, she decided that RA was trying to take too much from her life. “I realized I needed to turn the negatives into a positive, and to put my health first so I could be there for my child!”

“Everything in my world changed”
Flash back to the early weeks of her pregnancy with Finley, when Alicia first started experiencing shoulder pain. “I wrote it off to a strenuous workout, and the pain disappeared when I took a couple days off running.” But the flares kept coming, each one more intense than the last. “I didn’t test positive for RA factor until after I gave birth,” she says.

“After delivery, RA attacked me with a vengeance.” Her feet hurt so much, it was difficult to stand. And her hands were so swollen and inflamed that she was afraid to bathe her newborn for fear she’d drop her. But when her rheumatologist told her, with sensitivity, that she might never race again, Alicia hit rock bottom. “I had the most ugly cry you have ever seen,” she says. And just as she had to face the fact that her life would never be the same, she had an epiphany. She had a little girl—Finley, then just a baby—who would look to her for how to live her life. “I wanted to show her a strong female role model and lead by example,” says Alicia. “I wanted her to see that obstacles in life can either make you stronger or you allow them to limit your hopes and dreams.”

“I put my health first”
Determined to live her best life despite RA, Alicia teamed up with her doctor, Greensboro, NC, rheumatologist James Beekman, MD. “After diagnosis, I was trying to put off treatment because I felt pretty good. But Dr. Beekman explained that, with RA, it’s not just what you can see, but what you can’t see that affects you—and that the inflammation from RA also attacks other parts of the body, including your organs, bones and soft tissue (your muscle, ligaments and tendons). He made me realize that just because I can live with the pain, doesn’t mean I should. I know now—early treatment is the best defense you have!” Alicia stopped nursing and started methotrexate, then switched to a biologic medication which gave her relief. “I was so thankful for it. Biologics have really given people with RA more hope!”

“Honoring my body helps”
At the same time, Alicia overhauled her training regimen. She cut back on her running and started to cross-train. “On days I don’t run, I get on my stationary bike and do circuit-training for my arms and core. Working out helps prevent muscle imbalances, and stronger muscles help support my joints.” But she’s careful not to overdo it. “The heaviest weight I use is 15 pounds,” she says. On the three days of the week that she runs, Alicia also does some leg exercises at home. “You focus on what you can do with RA. Some days it’s swimming, and some days it’s a nap. What I’ve found is, you’re going to have bad days. And that’s okay. I came to realize, Wait, RA is not my fault.”

Her friends and loved ones know that, too—and for that, she’s grateful. “The biggest thing is having people who understand you,” says Alicia. “There are days I have brain fog and I just do my best to get through the day. But I know tomorrow will be better. And the days I can show up, I show up!” 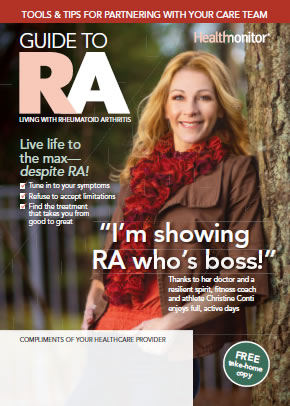